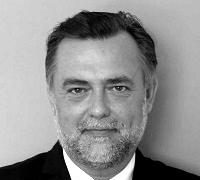 Head of the Office of the President

Mgr. Štefan Rozkopál was born in 1965. He is married and is the father of three daughters. He studied at the Faculty of Law at Comenius University in Bratislava and starting in 1985, he continued his studies at the Moscow State Institute of International Relations in the Russian Federation.

Since September 2013, he has worked as the General Manager of the Foreign Trade Section and Foreign Trade Policy and European Affairs Section at the Ministry of Economy of the Slovak Republic and acted as the permanent representative of Slovakia in the Trade Policy Committee of the Council of the European Union (2013–2015). Mgr. Štefan Rozkopál has held the position of Head of the Office of the President of the Slovak Republic since July 2015.