The Roma Spirit 2019 Awards, and event full of inspirational stories, humanity, solidarity and cooperation, has its winners! For the 11th year, seven laureates received awards from the members of the International Jury and the Jury of the Act of the Year, who decided on the winners just hours before the start of the gala evening. 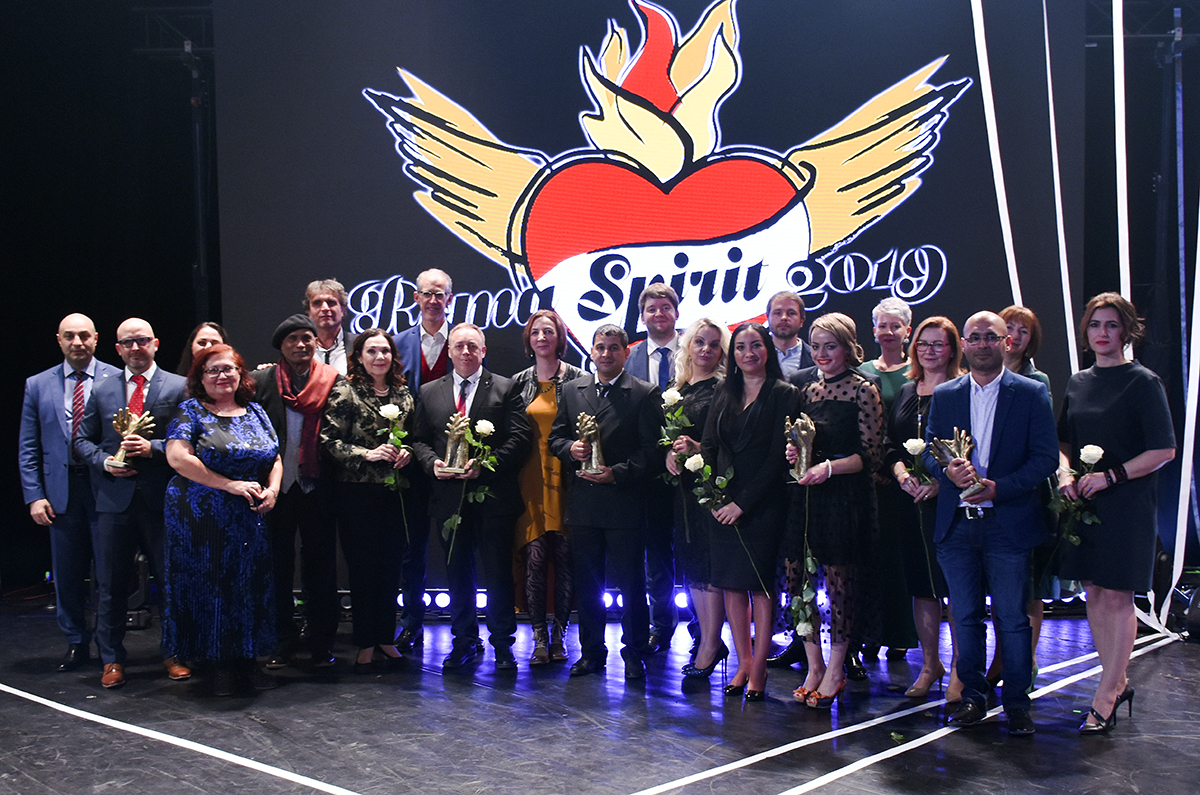 The jury was composed of Joachim Bleicker (Ambassador of the Federal Republic of Germany to the Slovak Republic), Basharat Tahir Quraishi (Secretary General of EMISCO), Barbara Illková (Director General of the International, Consular and Crisis Management Section of the Ministry of Foreign Affairs of the Slovak Republic), Isabela Mihalache (officer at ENAR), Dan Pavel Doghi (Chief Counselor of the OSCE Office for Democratic Institutions and Human Rights) and Irina Spataru (Member of the Board of Directors of Romano Centro).

The Act of the Year Award was awarded to Rozpor (Contradiction) and Batucada Bomba, for their “Radical Human Tour” through Roma settlements, to highlight the problem of nationalism and racism, and the lack of a solution to these problems. The awards were given in favour of Milan “Igor” Hudák and other victims of a police raid in Moldava nad Bodvou, who now face charges of false testimony, for which they received another award in the Aréna Theater to a standing ovation.

“Roma Spirit 2019 was full of strong and inspiring stories of people who come from different parts of Slovakia, of different backgrounds, are of different nationalities, but united in their message that it is worth fighting against prejudices and stereotypes in society. I congratulate not only the laureates, but also all the nominees. “- stated Ábel Ravasz, Government Plenipotentiary for Roma Communities.

The Roma Spirit 2019 gala evening was hosted by Vera Wisterová and Rudo Danihel, ‘Čavalenky’, who also took part in the cultural programme. Among the supporters were Braňo Jobus, Anabel Mollová and Markus Daniel, Tomáš Botló and many other great artists. The recording of the gala was broadcast by RTVS on December 5 at 20.10 on Dvojka channel.

Nominated for a systematic effort to strengthen and support women from Roma settlements called “Equality Agents”, and for actively promoting gender equality and community development from within.

Nominated for their extraordinary care and support for employees, corporate employment policy without prejudice, and for the public recruitment campaign “Employment for Everyone. Without prejudice. ”

Nominated for an effective action to eliminate segregation and to integrate marginalised communities through activities supporting housing, employment and education.

Nominated for his lifelong approach, police work, successful activity in sport cynology and determination to overcome prejudice and restore confidence of the Roma community in the work of police officers.

Nominated for the activities of the Documentation and Information Center of Roma Culture, which documents and presents the Roma cultural heritage in the field of music, literature, fine arts and oral history.

Category Act of the Year: RozpoR and Batucada Bomba, Bratislava

Nominated for a series of “Radical Human Tour” concerts in Roma settlements, which pointed to poverty in the lowest social strata and related prejudices, racism and nationalism.

To watch the recording of the gala Roma Spirit 2019

The 11th Roma Spirit 2019 is presented by the Association for Culture, Education and Communication (ACEC), Radio and Television of Slovakia and the Office of the Plenipotentiary of the Government for Roma Communities. The partner of the NGO category is the Carpathian Foundation. The partner of the Act of the Year category is Expres radio. The auspices of the Roma Spirit 2019 Award were taken over by the President of the Slovak Republic Zuzana Čaputová and the Public Defender of Rights Mária Patakyová. In the 11th year, 176 entries were received. The jury selected the winners from 21 finalists in 7 categories (NGO, Municipality and City, Society and Employer, Media, Personality, Culture and Act of the Year).

The Roma Spirit project aims to support the active efforts of all those involved in improving the situation of the Roma. The project has established a tradition of recognising work on behalf of the Roma community, has created a public platform to present positive and real benefits, bringing the public activities of individuals and organisations to support the integration of the Roma minority into society and improve their life situation. The founder of Roma Spirit is Ľubomíra Slušná-Franz.

The Association for Culture, Education and Communication (ACEC) is a non-governmental organisation whose mission is to build understanding, promote international cultural exchange, deepen education, and provide space for further communication with each other. In its educational activities, ACEC focuses on the preparation and implementation of educational and awareness-raising programs for socially disadvantaged groups, mainly programs aimed at the Roma minority in Slovakia.