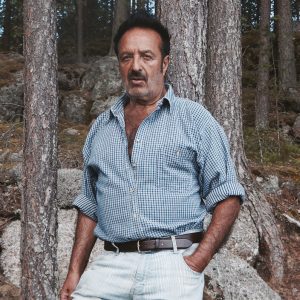 Nominated for a life-long contribution to the Romani culture and significant achievements as a social activist.

Cultural Counsellor Veijo Baltzar, a travelling Roma by his roots, is a Finnish author and allrounder of culture. He represents the world’s leading Romani authors who has done a life’s work for the Roma people through his cultural and social activity. Veijo Baltzar is also a poet, theatre director, playwright, visual artist, performing artist, pedagogue, scientist and a social activist.

Veijo Baltzar’s artistic production comprises over 72 literary works, including 8 novels, more than 30 plays and musicals, an award-winning film, librettos and TV screenplays. Baltzar founded a professional Romani theatre Drom and acted as a teacher at the Theatre Academy Helsinki. He is a respected and well-known cultural persona and opinion leader in Finland, who is proud of his cultural roots.

Veijo Baltzar has discussed and brought forth the richness of Romani culture in his art for 50 years. He has acted as interpreter of Romani culture and created significant dialogue between the Roma and the majority culture in Finland and internationally. Baltzar’s novels as well as the first and only professional Roma theatre in Finland, founded by him in 1976, created a personalpoint of view for the Roma people. Baltzar’s literature and theatre works have given Romaniculture visibility and made it known to the majority of the population, while raising and developingawareness among Roma of their own roots and spiritual and intellectual origins.

In 2002, in order to strengthen the position of Romani literature world widely, Baltzar founded the International Roma Writers Association (IRWA).Veijo Baltzar is a Roma intellectual and artist of an extraordinary nature. Referring to the exceptionally wide range of activities of Mr. Baltzar, Mr. Petr Drulák (Deputy Foreign Ministerof Czech Republic) called him in 2014 a “modern renaissance person” as well as “a wandering intellectual”.

Baltzar has also significant achievements as a social activist, scientist/philosopher and cultural/political actor. Through his artistic works, social activity and large visibility Veijo Baltzar has impacted 200 millions of people.