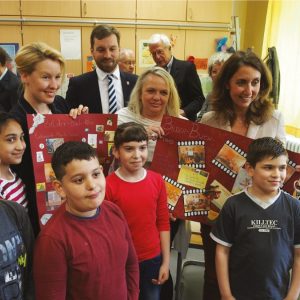 Nominated for actions aimed at overcoming the gap between the newly arrived Romani people from Romania and Bulgaria and the citizens of Neukölln in all areas.

Given the situation with EU internal migration of Roma from Romania and Bulgaria, the district office took actions to encourage long-term inclusion of Roma immigrants in all aspects, including housing, work, education, health, and social participation. In cooperation with the civil society, the district office started a working group (2011-2015) and appointed a coordinator whose main role was to achieve an improved integration of the Romani migrants from Bulgaria and Romania.

Tools that have been used to achieve the long-term inclusion of Roma include: language and cultural mediators, Bulgarian, Romanian and Romani in schools, and Children and Youth Health Service, extension of the educational consultation by peer mentoring – Stadtteilmütter (Neighborhood-Mothers) with qualified Roma women, free German language courses for adults by teaching-tandems (teacher + Romani).

The Roma students are required to attend school, their skills and competencies are supported. Even Roma youth who emigrated from regions with a poor educational infrastructure and therefore having knowledge gaps at the beginning of their school career are able to reach all educational qualifications up to the highschool diploma. The first graduates are already integrated into the dual system of vocational education.

Romanians and Bulgarians, including Roma were informed about their voting-options for the election (district assembly) and related participation possibilities. They became active in the civil society. Parents, who moved away from Neukölln, have their children still attending the primary school in the district due to the outstanding support.

Each year the street festival “Herdelezi” for Roma and Non-Roma is celebrated in Neukölln. It became already part of the diverse culture of Neukölln. The rich culture of Romani people has an influence on the multi-culture in Neukölln. Many citizens of Neukölln changed their mind and lost their prejudices against Romani people. On the other hand, Romani people’s attitude towards the administration, teachers and so on has improved as well.